With all the delicateness of a newborn (and of one still bouncing on the after-effects of last night's mango cider), I, Jay Cool - Jay Cool the immortalised Blogger - I, am back.

I'm feeling as good as new and I'm dizzy with anticipation. Suffolk Punch Comedy Club is back with me, and we're in a brand new venue. It's not The Brewery Tap and it's fresh. I find a good perch - there are plenty empty perches to choose from and take a look at the talent.

PJ, our emcee, is here already - there's no keeping him down! And he's wrestling with a microphone, trying to get it's position just right, not quite upright, but just at the halfway-house angle of 45 degrees, slowly teetering up towards 35 degrees, in anticipation of the massive audience about to burst in through the door. The mic, tonight, might just get lucky!

I, tonight, with my soulmate (mango cider), might just get lucky too. So, I head over to the bar. With caution. With caution, because the bar is either being propped up by, or is itself propping up, a network of have-seen-better-days old regulars. None of them are smiling and, at least one of them, is glaring at me - eyes popping out, like it's the first time in about fifty years that anyone under the age of ninety has dared venture out into his vicinity. Still, I'm here and I'm fresh so I go for it.

There's no mango cider, so I order an Aspall's. Already, I'm feeling little-wizard Oz's* helpful spell of immortality starting to wear off, but I hear a snigger from the old man on my right, so bold as a Jay Cool can be, I smile at him. He smiles back:

So this is why they're all so miserable. They've been keeping their lips pursed for good reason. But, I see now that there is hope - a lot of hope. On 'very' close inspection, I see that this single tooth is a pearl. It's all shiny, smooth and sparkly and I realise - I feel it in my once calcium-deficient-menopausal bones - that we are just the thing. Suffolk Punch Comedy Club has found it's true home.

We are here at the Long Melford Ex-Servicemen's Club and we are needed. We have a duty towards these men. We need to give them the full treatment. We need to make them laugh again.

And, right on cue, the crowds burst through the door. It's not exactly a crowd - more of a threesome. But they are making enough noise to qualify as the latter, and I can see why. One of them is dressed in an orange jumpsuit, an escaped convict, with his giggling rescuers. Must have come to the wrong place. These ex-servicemen are law-abiding types. And the barman is reaching for his phone, no doubt about to dial up the law-enforcers. No, I tell him. No, stop right there! It's just Clayton. Clayton, our first comedian - our opening act. Let him through!

And the reason for Clayton's strange attire is becoming clear. He's clutching onto the mic (it's still only at half-mast) and he's offering up his childhood hard-luck back story. Mum took him to the Barber's for a nice haircut, to smarten him up for a trip to the Doctor's - whilst he had blood still gushing out from a large hole in his scalp. Seems he was a 'clumsy twat', accident prone, with a smarter-than-smart Scottish mother. 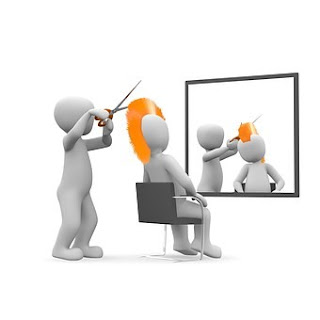 This is all a lead-up to Clayton's confession that he's just escaped, not from a high-security prison, but from a mental institute. He's almost reduced me to tears of anger and rage at the authorities who locked him up, without consideration of his ADHD and multiple-personality disorder diagnoses, when I recall that - hey - we're at a comedy club here.

You're supposed to be making these old men laugh, Clayton, not sending them further into their grave-yard of post-traumatic depression. What is going on here?

And such lies, Clayton, such lies! You have no friends you say, no friends! Such woe and sorrow - just imaginary ones. "No friends!" You're the only one in this venue with any friends! Your two rescuers are the only ones in here laughing and guffawing at you. Your friends (okay, and PJ as well) are the only people in here. Take a look over at the bar. 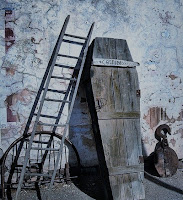 Where have all the regulars gone?  The bar and the old men have nodded off into a deep slumber - they have merged - a merger of splintered old wood and skinless bones. Look at what you've done, Clayton! You've brought in a graveyard of doom. "I may be a leper but I still like a hug. Come here!" What? No, Clayton, you cannot rescue the situation by going from escaped-lunatic-this-is the-only-job-I-can-get grave digger to enigmatic Cult Guru. We will not all gather round for a group hug (there aren't enough us, and who's fault is that?). Get on out of here!

Ollie Watson - get on in! Cheer us all up! Exorcise our spirits and bring in the light!

Ollie. So glad PJ's booked Ollie for this  evening. Thatcher, turned poet, turned comedian and failed Britain's Got Talent auditionee (that, I can personally empathise with!). So, I'm all ears. A suicide bomber, hacked off by the appearance of his rucksack in a CCTV video - why did he buy boring beige? The consumption of a meat-free mountain at the Toby Carvery, whilst fixated on an old lady's bulging neck boil. Pus. Spunk. Glass. Explosions of obscenities and urbanities all round.

And a Thatcher too, a Thatcher who I thought was going to tell me about the delights of the English countryside! A Thatcher who can't even climb up high enough to hoist his marker up to half mast (the mic is now virtually vertical, almost 180 degrees, head hanging low, heading on down to the floorboards). Another loon. His late arrival clearly a cover-up - an attempt to disassociate himself from Clayton. Just another escapee!


Pick that phone up, Barman!

Call in the Undertakers!

Let's get our men standing up straight again! No?

Another half of Aspall's anyone? No takers? Okay, I'll make that a pint for myself then ...

Sources: The photos of the comedians are the author's own. All other images are Creative Common's Licensed images, available from Pixabay. 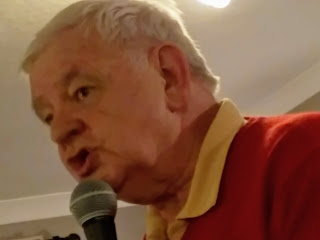 Grunts and Glurks at The Tap

And yet another exciting, ripple-inducing comedy evening, hosted by our emcee, PJ! PJ's on a bit of a roll already, telling rip-roaring jokes about Europe, pensions and Brownies. Pretty sure that there's a connection - somewhere - between this trio, but I'm a trifle distracted by the contortions of our emcee's lips. Somehow the dipped-upper lip and the red jumper have merged into one (helped along by the hallucinatory effects of my usual pint of apple mould - Aspall's in this case!), and this is all I can see is a beautiful-pink fish blowing bubbles at me: Such a beauty, puckering up its heart-shaped lips, puts me in mind of the one true love of my life: Available via Bing, labelled as Creative Commons Licensed The resemblance is really quite astonishing. What haven't you told us, PJ? Still, judging by the next pic, there's hope for you yet! Your lips could be your fortune! And, what's more, you could pull in the birds, rather than hav 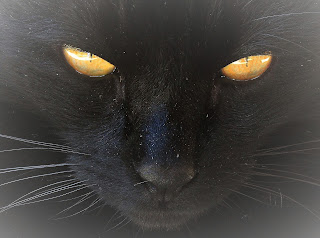 Feast of the Feline

On entry to The Tap, I find my gaze drawn towards a long-lashed beauty, perched at a high table on a bar stool, who presents an arresting site. I pause. I stare. I stare some more. Is it rude to stare so directly? To let one's attention be frozen by one so sleek, smooth and glossy. Would it be so wrong to saunter on over there, to reach out my hand, and to sneak a quick stroke? Should one be obliged to ask permission to touch a feline? A black-cloaked cousin of the panther? Such a dilemma! If I just walk on by and ignore the temptations of the moment, is that the same as having my path crossed by a black cat? Will I forever after be reminded of a missed chance, by a lifetime of unfortunate incidents? To stroke, or not? To stroke, or not? To stroke, or … I walk on by. Aaron Hood's on stage, clothed in a red and black lumberjack shirt. Not shiny. Not glistening. And definitely not tempting. The whole 'not for today' image is further exacerbated by the 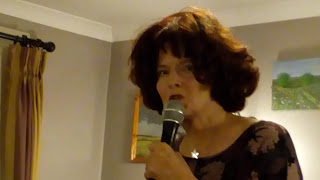 'Seventy-three and up for grabs?' It's Janet Benisworth! At last a genuinely ancient comedian; not just some early forty something undersexed male, claiming to be middle-aged, trying to get the female sympathy vote. And, even better, I've never seen such an old specimen sporting such lustrous-dark locks. I sit up and take notice. A great fan of slapstick humour, I anticipate that the loss of Janet's wig, is bound to be far more entertaining than her jokes. I'm wrong (not the first time!). Janet draws us all right in there, right through her wrinkly-old-outer casing, and straight into the depths of her heart. Seems that Janet, like myself, is a fan of the multiple-choice love questionnaire, made so popular by the seventies' magazine ' Jackie' (No, I'm not that old!). She's also a great fan of the ginger , presenting us with a Prince and the Pea scenario. I can see it now: Janet Benisworth at The Brewery Tap photo by Jay Cool